My fourth night out in a row. Not bad for this grandma. A good circle of musicians tonight, though we are missing Sean, who is in Ireland at the moment. (And I wonder if he's at some pub in Ireland, thinking of us and singing, "Missing you, all for the price of a flight.") Also, Cormac and Alex have not yet returned from their travels abroad. Still, for a cold January night, there was a good crowd - a nice mix of regulars, folks who knew each other from other venues, and folks meeting for the first time. Good to have David back among us, as well.

Jon, David, Liam.
And daddy won't you take me back to Muhlenberg County
Down by the Green River where Paradise lay
Well, I'm sorry my son, but you're too late in asking
Mister Peabody's coal train has hauled it away.
From John Prine's Paradise. 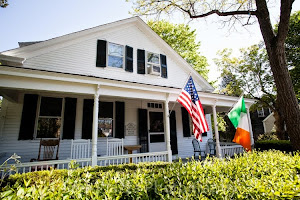 In the early 1800s, this house, built by Capt. Alexander P. Weeks, was moved along two miles of dirt road to its present in-town location by a team of oxen. Upon its arrival, the ladies spread out a feast for the workers, a fiddler was called, and the dancing continued on into the wee hours. Growing up here, there was always music around the table, attended by friends, relatives, and neighbors. I have moved back to this wonderful house, returned to my roots, and it is my intention to continue the tradition that was begun on Day One: to fill this home with fiddles and music and friends and family. 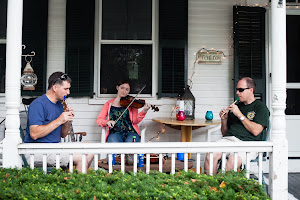 Vineyard Trad Sessions. Musicians: if you're visiting the Vineyard, give a holler or stop by (117 Upper Main Street, in the heart of historic downtown Edgartown), and we'll have some tunes. I also host on-going trad sessions featuring a variety of guest musicians. Give a holler at 617-872-6110 or email me at sarapiazza@sarapiazza.com for more info. Cheers!